It wasn't the most horsey week last week as I ran away from my responsibilities for a few days to enjoy a little Florida sunshine. I did have my lesson on Shiny on Wednesday though! She actually nearly fell down AGAIN! I couldn't believe it. Fortunately, this time she did catch herself. But it did lead me to be a weenie about jumping, and we just worked over one little baby crossrail. Baby steps my friends! She had fun jumping I think. The first one she jumped about 5 feet higher than necessary, but then she smoothed it out and had some lovely relaxed efforts. We have another lesson tonight, but it went from fifty five degrees yesterday to thirty today plus snow... So I might have a sass monster on my hands.
I was signed up for a lesson on Thursday with Eros, but I got a call from the vet that they were ready for Pammon to come up this past weekend. Which left me with a lot more to do than originally anticipated before I left on Friday morning. That also meant I had to mad scramble to find someone to bring him up there! Fortunately, the barn owner was able to make that work for me. I'm super grateful they were able to rearrange their Saturday to haul him. Figures the vet would want him the weekend I'm not around! So long story not all that short, I canceled my lesson and just flatted the horses so I could have more time to get Pammon packed and finish packing myself.
Also at the last minute I had to find someone to stay with my dogs because my mom was having some kind of temper tantrum. She does this every year at the holidays, so I really shouldn't rely on her. But free dog sitting is just really nice... Anyway, I got lucky and my weekend barn helper was able to stay with the pups. Nothing like everything happening at the last minute, right? I'm generally pretty type A. I make plans well in advance. I have lists so everything gets done in time. And inevitably, my entire plan always blows up in my face at the last minute. Thankfully though, despite all the stress, everything came together and I was able to leave on time Friday morning. I had a 12:40 flight, and actually got to the airport stupid early. I kind of enjoy hanging in the airport though, so it was fine.
I arrived in Florida right on time, and my dad and step mom picked me up. We had an early dinner and relaxed at home afterward.
Similar to how things generally go for me, the same is true of my dad. He had started a rather large backyard renovation at the Florida house and it was supposed to be done well before this weekend. Dad and stepmom were hosting a boat parade party, so obviously, we would need the yard to see the boats! And well... When I got there Friday, it was not done. There were walkways that were still dirt (yikes). And the worst part was the pool... They had started to refill it the day before, but a pipe had broke. So the pool started filling with muddy water. The mud was discoloring the new concrete, so they had to fill it ALL THE WAY to keep the color uniform. Then drain it, scrub it, fix the pipe, and refill it. So that was exciting! Fortunately, it all came together. Even if at the last minute. Seems to be the theme of the weekend.
So anyway, backing up, I headed south to visit with trainer on Saturday morning. It was great to see her and her horses are looking great. I didn't stay too long though as I wanted to get back in time for our shopping spree for Toys for Tots. Who would want to miss that?! It was quite a success.
The parade and party were really fun. Perfect weather, tons of food, maybe a little too much wine... All signs of a good party!
Originally, my stepmom and I had planned to take a lesson on Sunday morning. But we canceled because her family was visiting for the party and leaving in the afternoon. Didn't feel right to leave for several hours before they left. Instead we went for a boat ride. We beached the boat for a bit to let the teenagers swim. It was a lovely afternoon! (And super relaxing!)

Sunday evening consisted of mani/pedis and then laundry and packing. Short trips fly by so fast! They have changed the flight schedules from years past and the return flight is at 9 am. Stupid early if you ask me. Who wants to return to the tundra so early?! Seemed to be the consensus. I overheard several people on the flight saying they didn't like the new earlier time. But it was nice to be home early, even if I did mostly waste the free time. I met up with the book club ladies for dinner that evening which was also a nice treat. Kind of like extending the vacation a few hours more. We went to a really fun old restaurant in a nearby town. They dress up in old timey clothing for the holidays and have carolers sing at the tables. 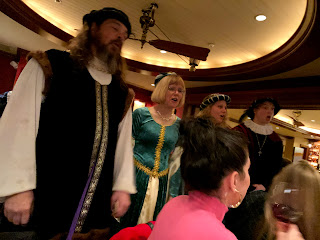 It's a bit confusing as the restaurant is maritime/colonial themed, and they seem to dress up in victorian outfits... but who am I to judge? It's still cute and fun.
So yesterday was back to work and then I flatted the horses afterwards. It was a little weird to not have Pammon there. But I know he's in good hands. And it was kind of nice getting done before 9.
So that was my past week! Not very horsey (sorry) but lots of fun in between all the stress of getting to the fun.
How was your past week? Are you ready for the rapidly approaching holidays?