Ponies hunt for the afikoman! 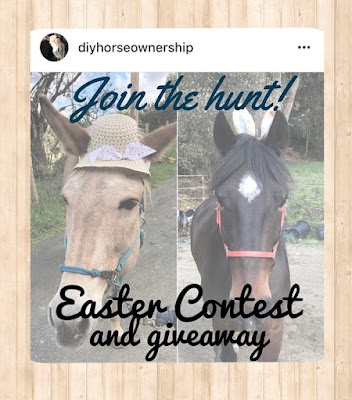 When I saw Olivia's post about a contest involving dressing up my ponies, letting them hunt for treats, and the possibility of winning one of Olivia's amazeballs quilted ponies I wanted in IMMEDIATELY! Unfortunately, part of the rules required making my own horse treats with one of Olivia's recipes. Time was tight between two nights of Passover and one day of Easter. The one store I had a chance to pop into had only half of the necessary ingredients. Thus, I'm ineligible to win the pony. But I still thought it would be super fun to host a pony hunt! Since we're Jewish, we're calling it the hunt for the Afikoman, and it makes zero sense that we're all dressed as bunnies.... But whatever. It was hilarious!
For anyone not sure what I'm talking about, the Afikomen is a special piece of matzoh that gets hidden at some point during the meal. After dinner, all of the kids present go hunting for the Afikoman. Whoever finds it gets a prize. When I was a kid the prize was a couple dollars. Probably now kids get $100. (I'm joking, I have no idea what they get these days!) Anyway, back to the hunt!
I had planned to make pony cake pops because I have a whole box of peppermint sticks already. But since baking was an epic fail, I used these treats instead: 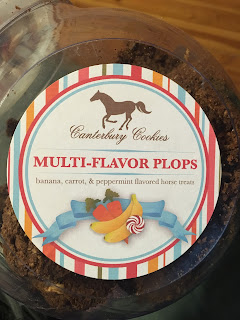 One of the flavors Rio apparently hates because he spit it out and refused to eat it. Jamp liked it though, despite it being already chewed.
I had hoped to play this game outside in the ring mounted, but alas it's been pouring buckets all day. (Hey, at least it's not snow this time!) So we took the fun inside.
Before the hunt could start, some weird bunny had to hide the treats: 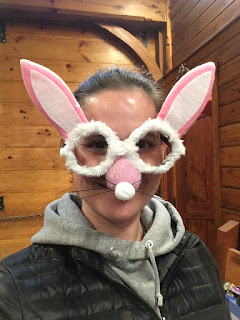 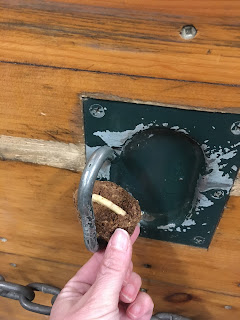 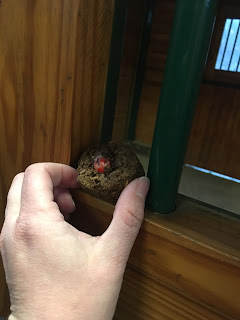 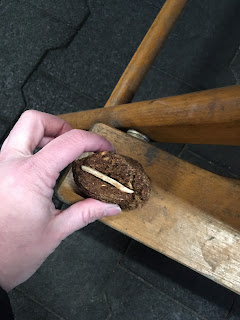 Jampy went first after getting his ears on. 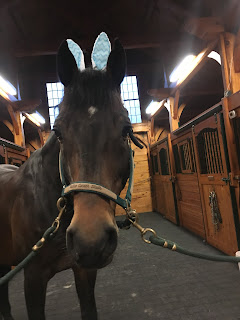 He really couldn't find any of them himself even when I basically led him to the treats.
He did find the one on the chair though. 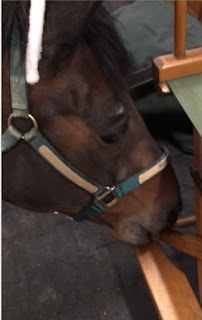 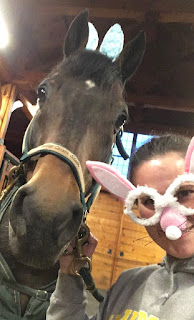 Even though he wasn't particularly good at hunting for treats, he had a lot of fun. And wasn't even afraid of the bunny!

Rio went next (obviously, since I only have the two of them at home). 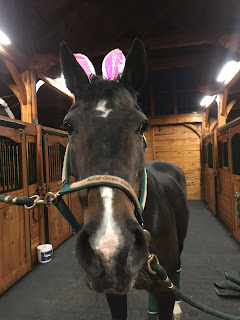 I put a few treats on the floor to get him started. (I should have done that for Jampy too, but honestly, I don't think it would have mattered.)
I stuck a few in the little nook between the water pipe and the door frame, which was a great spot in theory... But poor Rio needed help getting the cookie out of there. Oops, sorry buddy. Good job finding it though!
He definitely had fun hunting for the Afikoman. 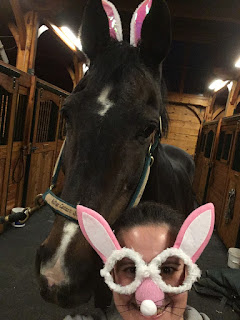 Have you ever hosted an egg hunt for your ponies? This is a first for me. When I was a kid, the barn I rode at did a mounted egg hunt every year. It was all human treats though. It was a BLAST! There were treats hidden everywhere: up high on the walls (we used the indoor) , inside jump cups, thrown all around on the ground. You name a place, there were treats there. We had to get on and off our horses unassisted. It was chaos. And tons of fun. Usually someone split their pants too. But letting the horses hunt this time was new territory. I think it would be really fun mounted so I can help them better. Hopefully next year the weather will cooperate.