I can't even pretend like this is posting Wednesday. It's midnight already and I've typed only seventeen words. So what's up Thursday? In all honesty, not much up here this week. The weather has been ridiculous! Last week it was pretty chilly with highs barely reaching 60. This week? It was 85 today. Oh New England, you're so silly!


Last week was full of dark chilly rides until the weekend when it was light out and chilly. You know what those things bring about? Wild ponies. SO MANY WILD PONIES. I no longer have any idea what it's like to ride a horse that listens to me instead of the wind and crunching leaves. No idea what-so-ever. If anyone knows, please tell me all about it.

On the bright side, Rio is doing so well with his fancy flip-flop shoes that we're back to tack walking! Yaaaayyy!!! There's LITERALLY nothing better than getting to sit on your heart horse. Nothing. Even if all you do is walk (and occasionally spook just a little).
I got to ride Badger both days this weekend. Unfortunately, it was cool and windy which does not lead one to the elusive magic canter. It does lead to scooting and ear pinning though. Sadly, I have only one more weekend with Badger before he heads to Florida. I'm ridiculously jealous of him. I wish we could all pack up and head south. I'm not sure yet when I'll get down to visit, but I'm hoping it's not too long. When I negotiated my new contract at work, I made sure I could work from home sometimes, so I won't have to take unpaid days if when I use up my vacation time as long as I actually work after riding in the morning. Woohoo!
Fun story (live fact check: there was almost nothing fun about the following story). So Sunday after riding Badger in the morning, I rode the rest of the boys in the afternoon. I got on Jamp first, and I could hear the neighbor doing yard work. He was on the other side of his property so I wasn't too worried. Jamp was being completely ridiculous so I offered a compromise of only using half the ring in exchange for him pretending to listen to me. After trotting for awhile to the left, I changed direction and realized I was rapidly losing my audience. I also could hear the neighbor and his chainsaw approaching our shared property line. I was on the far side of the ring from him, so I let Jamp stop and watch:
You guys. My neighbor and his chainsaw started cutting limbs off a tree right next to where I was riding! I'm not sure about your horses, but that sort of thing is worse than a herd of dragons being released into the ring for Jampy. He somehow managed to stand and stare though, without any added drama. After a little bit, my neighbor wandered off. With a deep sigh of relief, Jamp reluctantly went back to work. But then, neighbor and chainsaw CAME BACK and started hacking at the tree again. I gave up and brought Jamp inside. Choose your battles my friends. Fortunately for me, neighbor finished his yard work before I rode the other two.
In other news, we got results back from all of Romey's tests. He's definitely fully gelded, which while great, is kind of a bummer because I was hoping for a quick fix to his attitude. His hive biopsy showed nothing significant either, but my vet thinks we should take a deeper sample. He agrees that it's not normal to have hives in the exact same spot (and only that spot) for months on end. So I guess I need to schedule another appointment for more diagnostics. Until then, more of this:
On the non-horsey front, I've done no running at all. Heh. Someday I'll find my motivation there... But mostly I'm more in line with the Pugs' favorite past time: 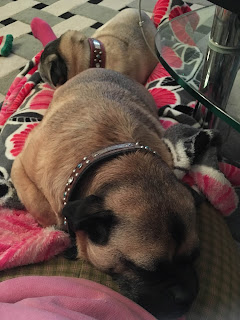 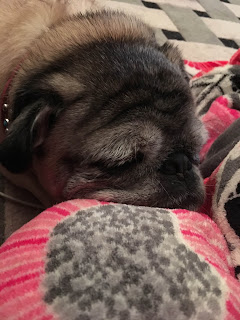 That's what's up this Wednesday Thursday. What's up with you?