Another crazy Wednesday! Just barely squeaking this post in before the clock strikes midnight... hopefully anyway. I didn't make it before midnight... I guess it's What's Up Thursday this week.
In my quest to get qualified for the New England Equitation Championships (at the last minute), I planned to take Jampy to Mystic Valley on Saturday. I needed to WIN the class to get qualified since I only had half a point. But on the (likely) chance I didn't win the class, they were holding a second qualifying class on Sunday.
I was up at 4:30 am on Saturday to get Jampy all braided and ready to go. He looked quite handsome if I do say so: 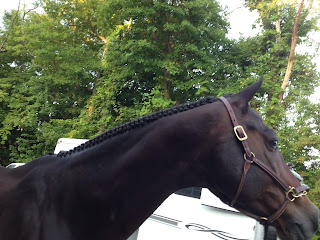 We arrived at the show a little later than I'd hoped, but with plenty of time to get ready. My trainer hopped on before me which is always appreciated. My flat class was first and it was uneventful. Jampy was a good boy and we won! 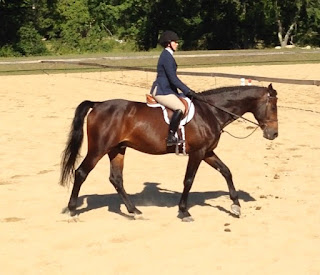 We did two adult equitation over fences classes after the flat and won those too. What a good pony Jampy! 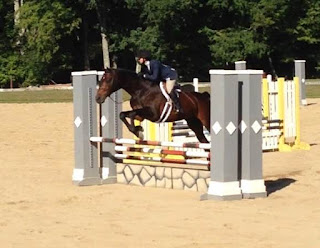 Finally it was time for our New England Adult Medal class. There were seven riders in the class, all hoping to get qualified. I had an ok trip. I thought we were a little slow, choosing the shorter distance to every jump pretty much. I was confident it wasn't a winning a trip. And I was right. Second. Boo. I quickly convinced my trainer to come back Sunday to try and get qualified. She agreed on the condition that after the show I head over to her farm and help her work her horses. I'm pretty sure that was a win for me all around as it meant I got to show AND ride an extra horse! Yay! 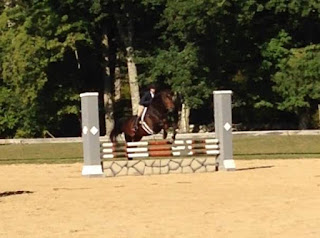 But I digress... It's still Saturday and we haven't left the horse show yet! We realized that the qualifying class on Sunday was going to be held in the hunter ring (we had been showing in the jumper ring). For most show horses, this really isn't a problem. But Jamp isn't most horses. Jamp's petrified of shadows (especially his own since that one follows him EVERYWHERE). The hunter ring at Mystic is Jamp's worst nightmare. Even the shadows seem to throw their own shadow in there. So trainer and I decided to add the Adult Hunters to our Saturday schedule. They were already running so it was completely convenient. 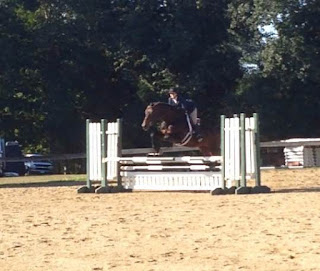 The first class was far from attractive. Jamp went around with his head in the air, his eyes bugging out, and the shortest choppiest canter I've ever felt him achieve. We finished in 5th. Out of 5. Hunters aren't our strong point, even when he goes nicely! The second class was somewhat more smooth with his head still in the air, his eyes slightly less bugged out of his face, and a little less spooking. We were 3rd that time! I decided to do the third class too and wound up agreeing to fill the classic. We were third again in the third class and somehow won the classic. I don't know how. But I'll take it!
We came home with some nice ribbons and prizes: 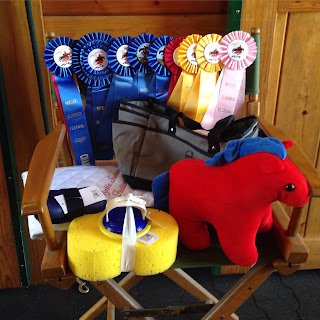 After the show it was more pony time! Rio had a nice hand graze and Ducky went for a ride before his turn eating grass. 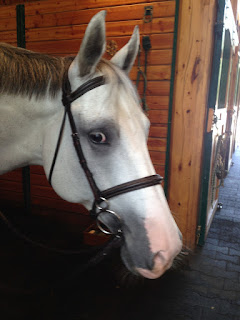 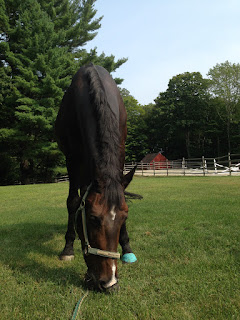 Because I'm sometimes a bad planner, after taking care of all the equine, I had to unhook the trailer and take the truck to the gas station for fuel. Then hook it back up to the trailer. Totally should have done that the weekend before! Once everything was all ready for Sunday, and I had spent some time with the puggers, I took myself to the local fair for junk food dinner. I wasn't sure if I'd have time to go so I hadn't made plans with anyone to meet up with, but I had fun on my own. Won a teddy bear too!
Sunday morning came quickly with a 4:45 AM wake up. I had left Jamp braided (I almost never do that!) so I had to fix a few braids and give him a good grooming before leaving. 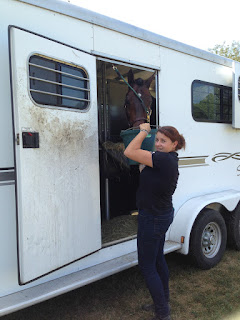 We arrived at the show with plenty of time (thank goodness) so my trainer could be a human lunge line in the terrifying hunter ring. Jamp acted like he'd never been in there. Such a child sometimes. You'd never know he's 16. I even had time to practice my course before the show actually started.  Of course things were going far too smoothly. As it turned out, there weren't enough people to fill the class. Four riders are required to complete the course, and there were only two signed up. Thankfully the show manager decided to leave the card open all day so that people coming later could show in it if they were willing and eligible. I jumped my round, which was actually quite nice, and then headed home with Jampy. It was tough leaving having no idea if my class would count or how I finished! But I knew of a few people going to the show later in the day for jumper classes and they had very nicely agreed to fill the class if I needed. I have great friends! I only needed a third to get enough points for me to qualify, so I was feeling pretty confident.
As promised, once Jamp was back home and settled, I went to my trainers to ride one of her horses. It's so fun to sit on something different now and then! I didn't get any photos, but the mare I rode is a very tall bay, about 17.1 I'd guess. She may accompany Jamp and I to the finals in case he decides to have a repeat of last year... It never hurts to have a plan B!
The rest of Sunday pretty much mirrored Saturday minus the fair. Rio time, Ducky time, Pug time. 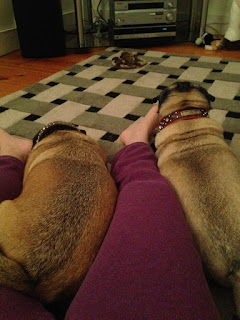 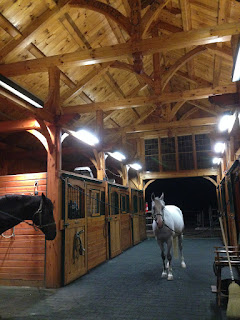 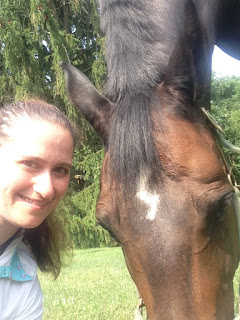 At around 5 o'clock, I got an email informing me that I won the medal, and there were enough people for it to count! Yay for qualifying!!!
Monday came quick. Like so quick. Work's been busy which is nice because the days go super fast! I had been trying to get the vet out for Jamp, and finally he was able to stop by Wednesday evening. Jampy was needing a little maintenance for his old man body plus I wanted the vet to take a peak at Rio's foot. 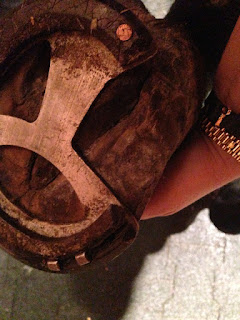 Jampy's visit went great, and Rio got a fantastic report from the vet! We have to wait for his hoof to grow out some, but it's doing well and we can try leaving the wrap off of it. Big step! I'm glad we're hopefully putting this episode behind us. Of course, once you patch up one kid, a different one has to have a problem right? Just after the vet left, I got on Ducky only to discover that he's lame. No heat or swelling that I can find, so I'm thinking he must have an abscess in his foot. Trying to get the farrier out tomorrow to assess the situation. If he's not successful, I guess the vet will have to come back out. Ugh. Always something!