It was a mostly quiet week here at the farm. It was pretty hot (yes!) so I didn't want to overdo it with the ponies. Not that Romey was in any danger of that!
Jampy just flatted most of the week. He's really starting to feel stronger and I can get a much bigger trot out of him than earlier in the summer. His canter is still so-so, but also better than it was. My weekend helper stuck the fake cats up on the rails of my diagonal jump, and I thought it would be fun to get a picture over it. Assuming he'd jump it... 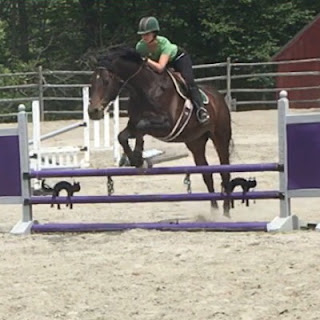 He didn't care at all. I was thinking he'd take a look and I'd get a really cute jump, but no. He literally just cantered over. Oh Jampy. He jumped a little cuter out of the combination though: 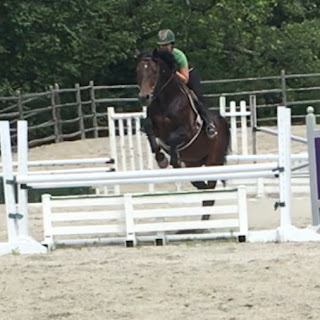 It's a terrible screen grab from video, and I couldn't get it to stop at the right part of the jump. But you can tell his knees were going up at least. And he even has an ear forward! I'm thinking I should probably put the noseband back on soon now that his face is healed up. On the other hand, I'm super lazy, and kind of enjoying having less buckles to deal with. Maybe I'll wait until it's obvious I need it.

Romey is starting to come around. I have no media of him this week though, sorry! He's not attacking me at the mounting block anymore which is really nice. I don't share his sense of humor clearly. The last two rides when I asked him to walk away from the block he did so immediately and willingly, so that's definitely progress. He'll halt and walk off throughout our ride. Unfortunately, he's still fighting about the trot. Once he decides he's ready, he'll trot off just fine. But it's completely on his terms at the moment, which I'm not ok with. Our vet appointment last week had to be postponed until this coming Friday, so I'm curious to see if there's any reason for that stuff other than attitude. We shall see! 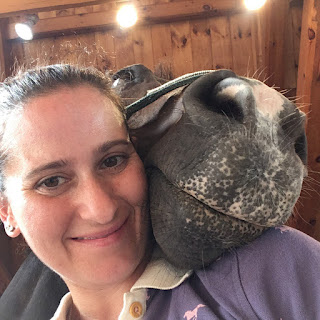 Rio of course is perfect. I've been riding him every other day, and very lightly. I don't want to stress the old man in the heat. But he's been happy, and especially enjoys when we "walk" out on the grass. Obviously there's a lot more eating than walking happening though.

I got to sit on Badger Saturday. Unfortunately, he's tack walking again. So that's all we got to do. He gets new shoes again this week and we'll see where he's at with that hoof. If he has enough growth and he's feeling better, he'll go back to Vermont next week. If he doesn't, he'll come to my house to tack walk for two weeks. Much better to do that than send him to the horse show and throw away all that money. Plus, then I'll get to have Badger at home!!! Woohoo!

The only fun and exciting thing I did this past week/weekend was our family's annual lobster fest. Normally it's in August, but they moved it up this year to accommodate my step mom's family visiting. It was so nice to see everyone! She really has a great family. As usual, my dad went a little overboard in the purchasing of lobsters... This is everyone cleaning up the leftovers: 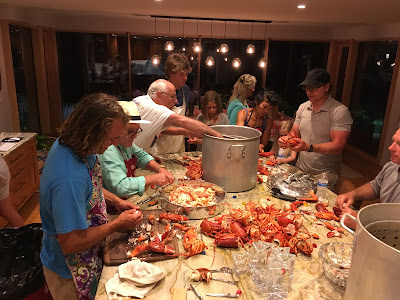 I'm not complaining though. I got to take home enough lobster to feed me for 3 full days. YUM! And in case you're wondering what ridiculous thing I wore to lobster fest: 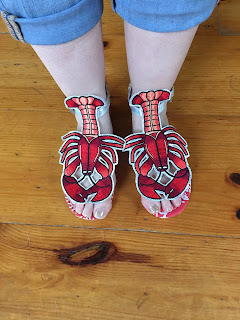 Lobster sandals obviously! These really are something. I'm not sure what exactly. But definitely something.

And that's all that's up this Wednesday. What's up with you?
Posted by Stacie Seidman at 4:16 PM